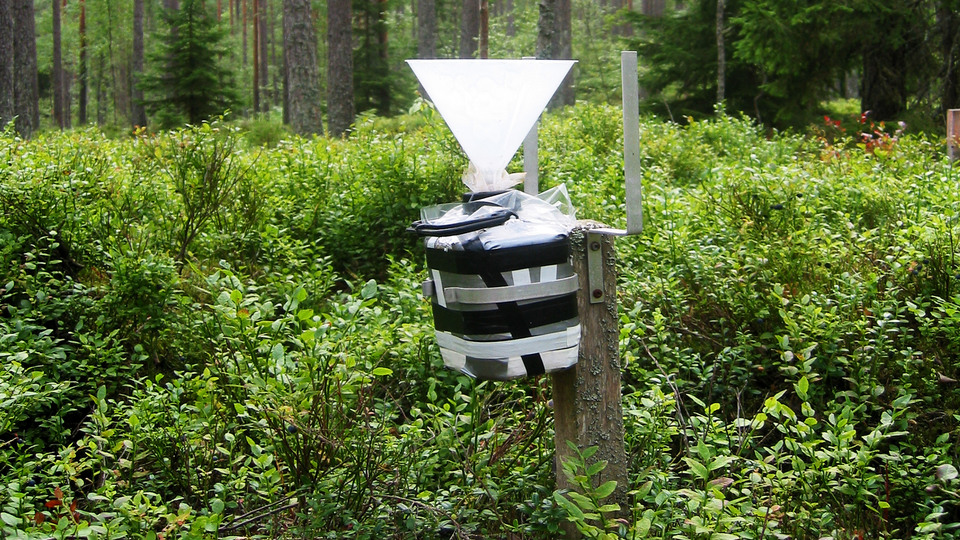 Krondroppsnätet monitoring covers about 60 areas in forests and in open fields throughout the country. The picture shows a sampler to measure crown drop from the trees. Photo: Gunilla Pihl Karlsson

Despite reduced emissions of air pollutants, acidification continues to be a problem, especially in the southern parts of Sweden. This is shown by the latest report from Krondroppsnätet's monitoring of forests and land. Measurements from 2020 show a probable effect of the Covid-19 pandemic, where society's shutdowns appear to have reduced sulfur and nitrogen levels by between 15 and 40 percent compared with previous years.

– It is likely that these reductions are due to the closures of various community activities in Sweden, the rest of Europe and globally, but definitive conclusions require further investigations, says Gunilla Pihl Karlsson, researcher at IVL and project manager for the environmental monitoring program Krondroppsnätet.

The deposition of acidifying substances over Sweden is largely due to long-distance transported air pollutants and has decreased in line with the emission reductions that have been made in Europe. Since 2001, sulfur deposition over Sweden has decreased by 74 percent and nitrogen deposition by 33 percent. But despite this, most Swedish counties do not reach the environmental goal Only natural acidification. The reasons are, among other things, continued high nitrogen deposition and more intensive forestry.

– Recovery is a slow process and several factors contribute to acidification. Nitrogen deposition has not decreased as much as sulfur deposition. Forestry also contributes to acidification through the trees' uptake of nutrients, which is compensated by the release of acidic ions. Acidification becomes permanent when biomass is harvested and extracted from forest ecosystems. In addition, nitrogen can start to leak when the forest's ability to absorb nitrogen is exceeded, which leads to further acidification, says Gunilla Pihl Karlsson.

In the 2020 regional evaluation of the environmental goal No eutrophication, most counties judged that they did not see any clear improvement in terms of development. The measurements within the Krondroppsnätet show that the deposition of nitrogen in the whole of Götaland and in the south-western parts of Svealand exceeded the critical load limit that Sweden has adopted as a target value for coniferous forest. There are also signs that the forest in southwest Sweden is approaching nitrogen saturation, which increases the risk of nitrogen leaking into groundwater and surface water and further contributes to eutrophication.

– The levels of nitrate nitrogen are elevated in the groundwater in several places in southwest Sweden, which shows that the forest's ability to absorb nitrogen is exceeded. It depends on the nitrogen deposition, but also on how much nitrogen is taken out of the forest ecosystems in connection with felling or as a leak with the runoff, says Gunilla Pihl Karlsson.

During the period March-September 2020, both air levels and levels of precipitation of both sulfur and nitrogen decreased across Sweden by between 15 and 40 percent, compared with previous years. The period coincides with society's shutdowns due to the Corona pandemic.

– In order to continue to reduce the problems with acidification and eutrophication of forest land in Sweden, it is important that we continue the work of reducing sulfur and nitrogen emissions further, both in Sweden and in the rest of Europe, says Gunilla Pihl Karlsson.

Read more and download the report here: Acidification and eutrophication in the Swedish forest landscape

Krondroppsnätets monitoring covers about 60 areas in forests and in open fields all over the country. In the areas, IVL, in collaboration with Lund University, has been measuring atmospheric precipitation and groundwater chemistry for a large number of substances, and parameters that are important for acidification and eutrophication of land, lakes and watercourses in Sweden for several years. The work is carried out on behalf of the Swedish Air Protection Association, county administrative boards and the Swedish Environmental Protection Agency and is part of the regional and national environmental goal work.